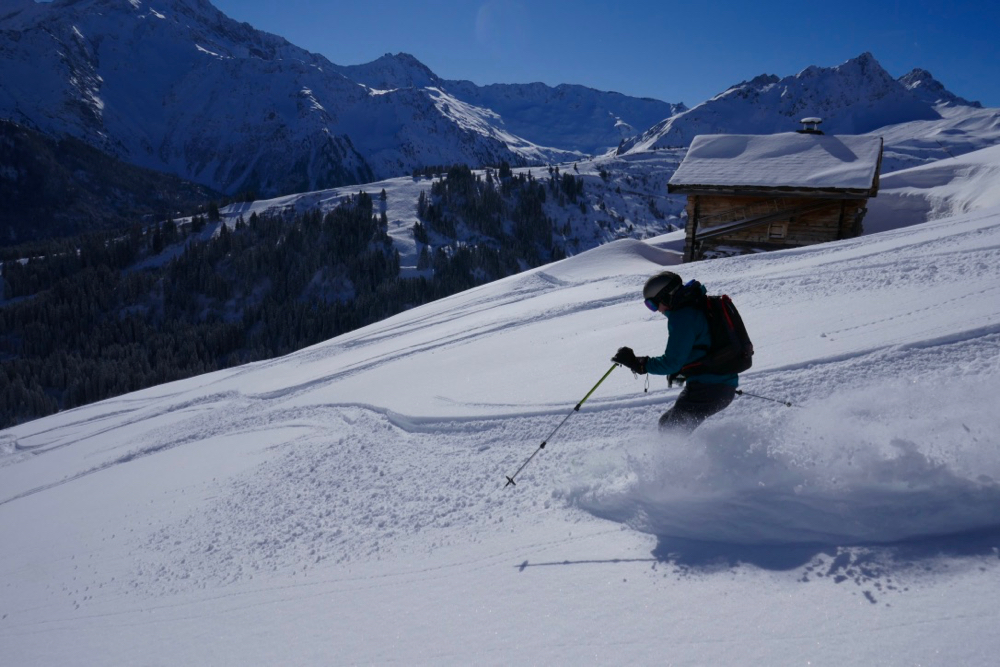 The combination of lots of nice fresh snow – blue skies and ‘vacances de ski’ local half term made for a big lift line queue at Les Contamines this morning…and most ski resorts in the area.  The wait was worth it, the snow was beautiful to ski both in the sun and the shade this morning and remained light and velvety in the shade this afternoon.

There was a wonderful pristine feel to the domain this morning as a brilliant blue sky revealed the impressive efforts made by the last 2 days of storm weather.  The mountains were plastered white again.   Pretty soon the canvas was getting tracked by an appreciative audience who had had a mixed week so far with bullet hard snow and stormy weather to deal with.  Today was the recompense!

There was something for everyone with mellow side country next to the piste giving great turns and plenty of teams skiing on the steeper sunny Aiguilles Croches side this morning before things warmed up and got heavy in the sun later on.

Whilst the resort was busy, the classic ski touring cols were much quieter and folk were perhaps wisely reticent to commit to the big slopes on the first day of sun after 2 big storm days.   There were only a handful of tracks on both the Cicle and Fenetre and the Chasseurs also had a few tracks plus a crownwall where a surface slab had released.  The crown walls from several spontaneous slab releases could also be seen on the north face of the Roselette.

Our team at the Grands Montets also enjoyed some great snow around and just above the tree line.  It looks like there is plenty more precipitation in the forecast for next week so lets hope it doesn’t get too warm again!  Bon weekend, bon ski.

Most of our winter – spring 202o ski courses are sold out, but there are still a few places left on the following programmes…

1 Place left – about to be full

Full – but could still add a team of 2 to this programme with a private guiding warm up & acclimatisation programme.

After some very springlike weather recently it was great to get back out in to some proper winter weather and ski fresh tracks in powder all day which is what our Chamonix off piste & mountain skills progression course did yesterday at Combloux.  There were lots of winter storm factors to deal with…lift closed to high winds, lifts closed due to a power cut, cold & windy weather, poor visibility etc but it’s all worth it when you get to ski powder all day!

There was good snow to ski both off the lifts and from skinning out of the resort including an ascent of the Petit Croise Baulet from the Col de Jaillet.  This had lovely deep light powder in the trees, which happily extend most of the way up the mountain!  The summit ridge area was totally scoured by the powerful W winds and there was just old boiler plate snow, ice and turf on the summit ridge.  But after 1 pitch down, we were enjoying fresh tracks all the way back to, then below, the Col de Jaillet.

Our classic course which is also running this week enjoyed some fun turns in soft snow at Les Houches today as most of the Chamonix Valley was shut down due to the strong winds and heavy snow.

The week had started with much tougher conditions and Monday basically had hard boiler plate snow around much of the lift accessed terrain in Chamonix.  Our Classic course team were at the Grands Montets trying to master skiing hard bumps and hard snow in general!  On Tuesday they did some ski touring training around Le Tour and over on to the Swiss side below the Col de Balme which provided a good journey & fine training, but with not many fun turns – so it was great to see the arrival of the fresh snow on Tuesday afternoon!

Kenny and Gavin were both running off piste & touring days for us earlier in the week and had some tough conditions descending from the Col de Rachesses above the Grands Montets and found difficult snow leading down to the Argentiere Glacier with the classic left hand route down the glacier being icy and scoured and another more central line being pretty complicated.  Again, few fun turns but a great journey well managed!

The Vallee Blanche had better snow and Kenny and the team enjoyed some fun turns in soft snow on the Petit Envers variation but this was all before the latest storm cycle arrived which looks set to run from Tues PM through to Thursday night – giving a high avalanche forecast and a variety of new snow conditions depending on the effects of the strong winds…à voir!