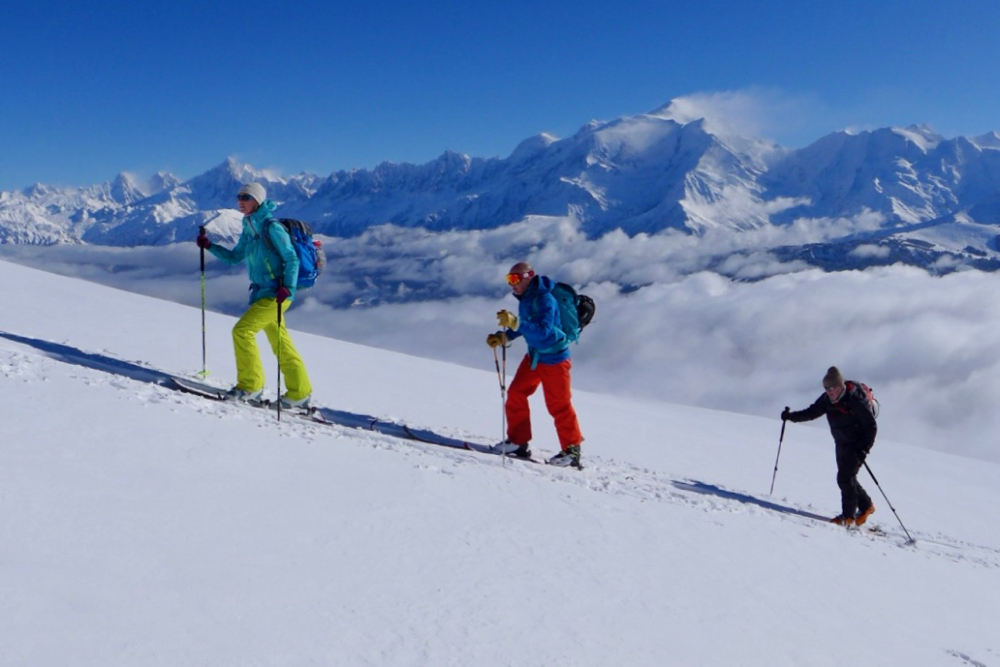 Many teams were enjoying the fine combination of sunshine & powder on the south facing slopes above the Col de la Columbiere today and there looked to be lots of fun sustained turns for teams making the effort to get up to the Col de Balafrasse and under the Pt du Midi.

We skinned up the Col de la Columbiere road and enjoyed the quiet shadier slopes en route to the Tete de l’Auferand.

There was little wind effect on the velvet snow in the shade and there was a decent depth of powder which we had to break trail through to get up to the Collette en route to access the zig zag approach to the West Ridge.  An interesting journey and a place to be in good visibility!

Once the West Ridge is accessed the extensive lifts and pistes above Grand Bornand suddenly appear and change the atmosphere from the shady ski touring ascent.  Great views also across to the big Combs above La Clusaz, La Tournette above Lac Annecy and Pointe Percee.  A great viewpoint and picnic spot.

Stephan and Christian had made a rapid ascent of the West summit of the Point d’Almet and enjoyed the descent of the Combe de Fours before traversing the Tete d’Auferand en route back to the parking at La Sallaz below Col de la Columbiere.

Higher up there is quite a bit of debris from cornice collapse and avalanche that probably occurred during the big rainfall event last weekend – but there is lots of good snow too after Tuesday nights snowfall and there were some great turns in the North facing meadows above Auferand and down in to the trees leading below the Col de la Columbiere.

The temperature inversion still seemed to be in force and it felt very mild and sunny at La Sallaz and we enjoyed the sunny terrace and excellent pain au chocolat at the new cafe in Le Repesoir.   A great end to a week ski touring in the Aravis.

Most of our winter – spring 202o ski courses are selling out now, but there are still a few places left on the following programmes…

Jonny and our ski Evasion Aravis team found more nice snow on the Montagne de Sulens today….but without such a good base as yesterday on the Croise Baulet and the icy or grassy base was often not far away.  It seemed there was locally a bit less snow here than in other nearby areas around the Aravis, Mont Blanc Massif and Les Contamines.  But it was a fun tour anyway with some good turns in places and great views across to Mont Charvin, La Tournette and much of the Aravis.

Yesterdays off piste day at St Gervais was wintery snowy, but most of the snow was in the air, not on the ground!  Thus whilst later on, there were some fun shallow fresh tracks to be had, especially in places with a firm base (like the piste!) the off piste was still generally quite poor with shallow powder on a breakable crust not giving much fun skiing.  However, at the close of play it was snowing quite hard with a rain:snow limit descending to below 800m at times.  This keep going through the night and snow quantities were much more significant by the morning with some teams reporting more like 40cms in places above 1600m.

Jonny and our Ski Evasion Aravis team start skinning up through the powder and clouds on the Petit Croisse Baulet but were soon rewarded for their efforts with clearing skies, fantastic views…and then some great powder skiing on the descent of the Croise Baulet, over the Petit and then down to Le Plan on the Col des Aravis side of the mountain.

The snow was scoured right at the top but soon got soft and fun and there was more snow on the South Face than over on the more wind blown north side.  The descent to Le Plan went ok, with a couple of powder on grass pitches and a river crossing!

The new snow & good skiing was welcome after the recent high altitude rainfall but it was a cold and windy day and the higher mountains got a blasting from the wind as this photo of the Mont Blanc Massif shows.

There was some good powder to be skied off the lifts around the Chamonix Valley but reports of some difficult and, in places, icy and serious / bad conditions in the Vallee Blanche.  See the report on the Chamoniarde Facebook page about that here.

We decided we wouldn’t be skiing off piste at all today, partly due to the High avalanche hazard but also due to the very soggy snow conditions caused by the massive rainfall yesterday with a very high freezing level.  Soggy snow not good!  However, poor conditions are often good for giving time to train and Combloux offers some nice easy touring journeys which can finish with a piste descent.  The pistes were moist but firm enough for some fun skiing, especially on the steeper pistes, although the very steep black “Aigle” run was shut today.  The rest of the week has some more positive elements and it’s looking cooler and with some fresh snow tomorrow and some sun later in the week, so things should improve for our Evasion Aravis team…

There are still some places available for this weeks Evasion Aravis Ski Touring course.

Up to nearly half a metre of fresh snow fell in the Aravis above 2000m although actual cover is highly varied due to the strong winds above the tree line.  There was some great snow at Combloux today including powder on the piste in many places as it had snowed long and hard after pisting…and there were very few folk about.   Most folk were content to ski the fresh tracks off the lifts around Combloux – Jaillet – Le Plan and it didn’t seem like a great idea to poke your head up over the tree line to get a blasting!

After weeks of sunny and dry weather it was great to still find some nice snow and fresh tracks – thanks to some great beta from Jonny!  There was no one else in the icy ski car park at Romme this Monday morning.  The weather was forecast to come in later and we had made the effort to get an early start, but this still felt a long way from the Chamonix Valley in terms of tranquility!

From the ski area there is the option of skinning direct up the steep slopes by the lifts…not sure they could be called pistes today!  Or we took the long and steady ascent via the track through the woods leading round to the Chalet des Vuardes.  The were plenty of tracks cutting through the trees and the snow still quite nice even down to 1700m.

Once above the tree line this is a highly scenic tour with increasingly excellent views of the surrounding Chablais, Aravis and Mont Blanc Massifs as well as down the Arve Valley to Lac Leman and the Jura beyond.

There is lots of terrain above the tree line and plenty of teams had been in here taking all kinds of different ski lines including back in to the woods or down the Couloir Salletaz to join the road leading to Romme from Le Repesoir.

As height is gained and the summit ridge is approached, even though the terrain is still easy, there are some increasingly ‘airy’ views and exposure above the Arve Valley.

It was inspiring to see tracks leading over from Sallaz south and through interesting touring terrain towards the Col de la Forclaz, 2324m, and this would indeed make a big inspiring touring journey down that past the Refuge Doran and down to Burzier.  Great views across to the impressive Arete du Doigt on Pointe Percée also.

We took a more mellow descent with an added skin over to Pt 1919m and then some more nice fresh tracks in the meadows next to the area roped off for the Tetra-lys.   The weather was rolling in as forecast and it looks like a big storm will be unleashed this evening and last until Wednesday with major snow fall and high winds forecast.   This should provide a welcome top up and hopefully even better conditions for our Aravis Touring & Evasion off piste course next week.

Many of our 2020 Aravis & Chamonix based ski courses are now full but we do have places left on the following group courses and also availability for Chamonix private guiding so please get in touch if we can help with ski or mountaineering guiding this winter or spring season.