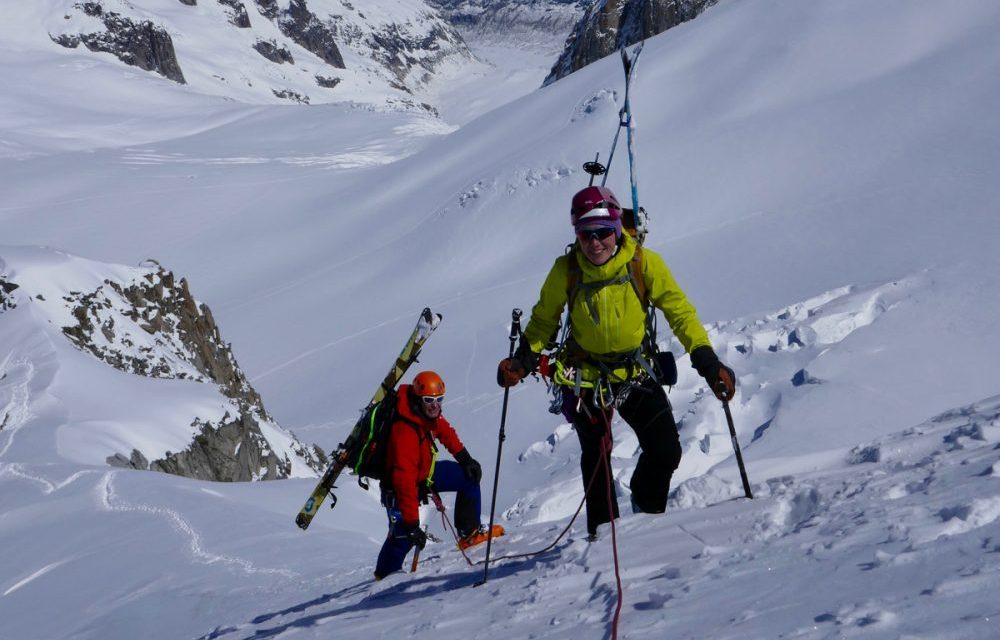 Recent storms have delivered plenty of fresh snow around the Mont Blanc Massif and, whilst most of the lifts and huts are now shut, plenty of teams have been out enjoying the May powder!  We had a high altitude Monday morning warm up from the Skyway Monte Bianco before heading over to the Gran Paradiso National Park in the afternoon.  From the Skyway, teams were skiing some of the steep couloirs leading in to the Toule Glacier although the access via the metal staircase is closed for the moment.   Teams were also skinning up the steep West facing slopes of the Pt Yelde heading towards the steep couloirs leading down in to the Periades Glacier. Plenty of teams skiing the Gros Rognon variation to the Vallee Blanche also and heading down to the Mer de Glace.

We enjoyed some fresh tracks before climbing the North Ridge of the Petit Flambeau and enjoyed great views to the South of the Gran Paradiso, which was the plan for the next day.  The ascent to Rifugio Chabod was easy and pleasant with almost completely dry paths to just above the Ranger base at 2200.   From there we skinned all the way to the hut on firm snow as it was a cool day with a good track.  Teams high on Mont Blanc reported bitterly cold conditions!

Again, good continuous cover to, and all the way up, the Glacier next morning made for steady progress albeit with some sustained steep traversing with ski crampons.   It looked like teams were also heading from the Chabod Hut up and over the Col Neyron (3404m) and then either back down to Valsavarenche or down and back up to La Gran Serra (3552m). Either way a fine journey!  One team were climbing the NW face of the Gran Paradis, which was a lot snowier than it was on our last visit in Mach, but still mainly bare ice in the upper third.   However there was a thin snowy strip to the climbers left of the face and it looked like the team were heading that way.   It seemed they succeeded as we saw a team topping out on the face when we were on the summit.

The snow volume was much better than a couple of months ago and the crevassed valley on the glacier ascent passed easily and the final steep snow slope around 3800 was also much snowier and most teams carried their skis and then skied from near the summit ridge.   Both Chabod & Vittorio Emanuelle Huts remain open until and will close this Sunday so there was a small but steady stream of skiers from both huts making the ascent.   The new bolted running belays on the summit ridge facilitate that part of the climb and make it swifter for teams in ascent and we took the new beefy metal runged ladder to descend to the rocky col between the 2 summits so we could also traverse over to the far summit….

The ski descent of the mountain was swift and fun albeit with some slightly windblown / crusty snow higher up.  This soon became well skied / side country like snow where there was any narrowing in the route and this gave easy fun and grippy skiing.  Lower down, off the glacier and below about 3100m there was nice spring snow on the sunny slopes and this continued all the way down to where the slopes joined the summer path just under 1000m below this with lots of enjoyable turns along the way.  An easy transition gave way to the summer path and rapid descent back to Pont.

A nice lunch pause at the Rifugio Emanuealle gave a great view of the inspiring steep line someone had just skied on Becca di Monciair as well as the impressively massive crown wall below the North Face.  This looked to be over 2m in height from a distance and the debris had run well down in the upper Valsavarenche….

Teams had also skied up the fine north facing valley between Ciaforon and Tresenta and the north face of the former looked snowy and getting ready for the early summer climbing season.   Numerous teams had also made the traverse in to the upper Valsavarenche and Col Grand Etret and then down the long valley to Pont.  This did not lead all the way to the campsite in Pont like some previous years but was ok down to about 2200m apparently.

Some of our Climb The Gran Paradiso courses this summer are already full but there is 1 place left in late June and places available in early September.

Our winter 2020 Ski Gran Paradiso course is also ready to take bookings and this covers the same action packed 3 day programme as described here including a warm up half day at Skyway Monte Bianco, 2 nights in the Chabod & Vittorio Emanuelle Huts, ski ascent of the Gran Paradiso and fine touring traverse in the upper Valsavarenche. 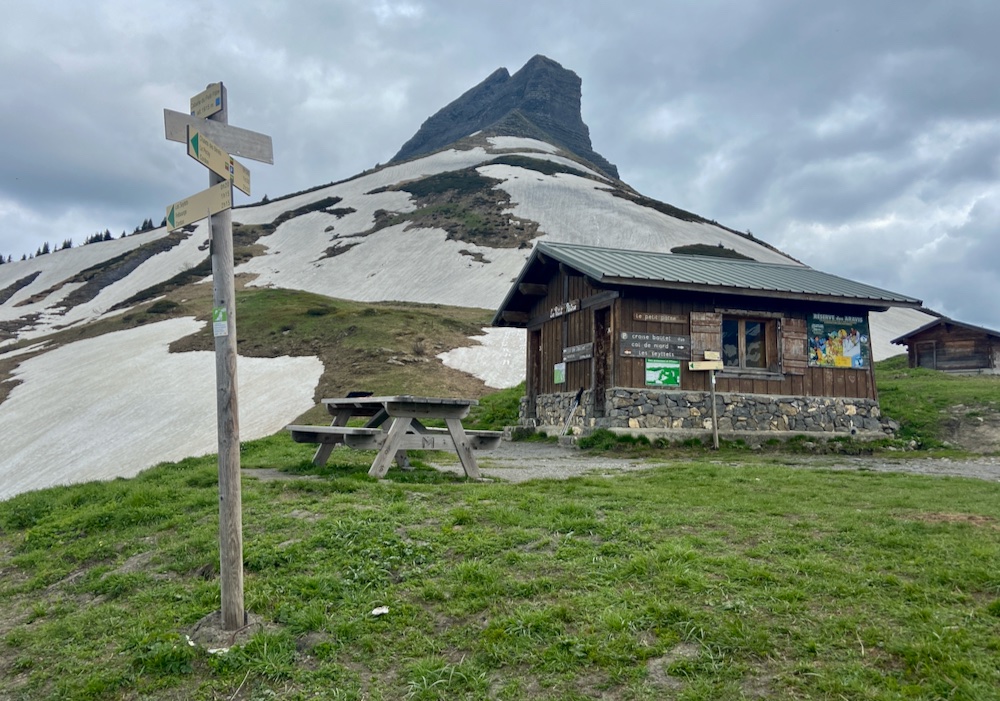 High Mountain Guides @High_Mt_Guides
May 25, 2020 @ 6:07
Stunning views of the #MontBlanc Massif from the Désert de Platé above #Passy, first marmots of the season and an update on snow conditions and what guiding services we can offer at the moment here...
https://t.co/iK3pb4qCWY https://t.co/J4UiF3eK5Z
View on Twitter 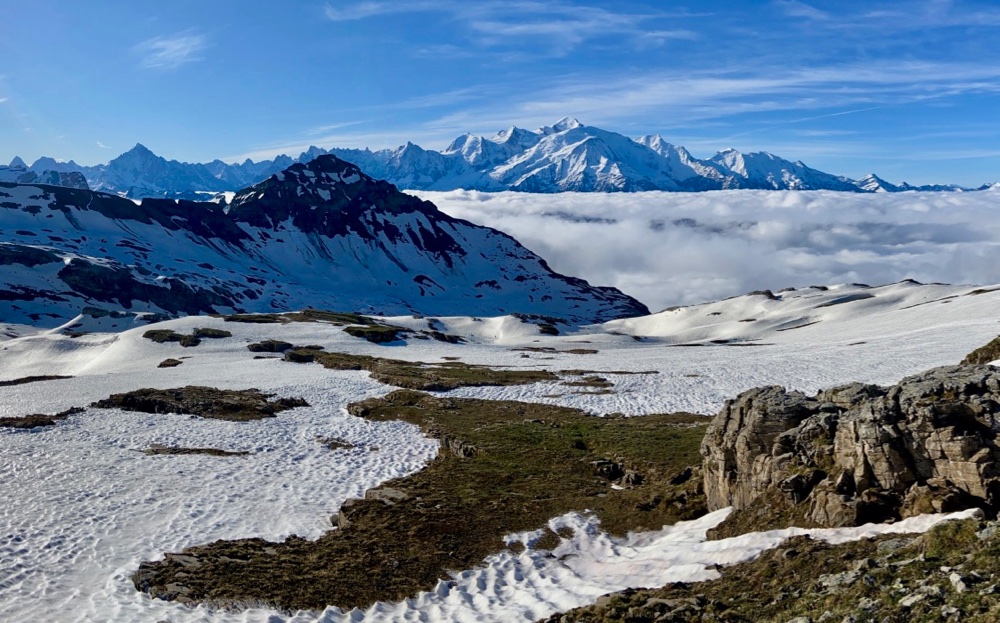 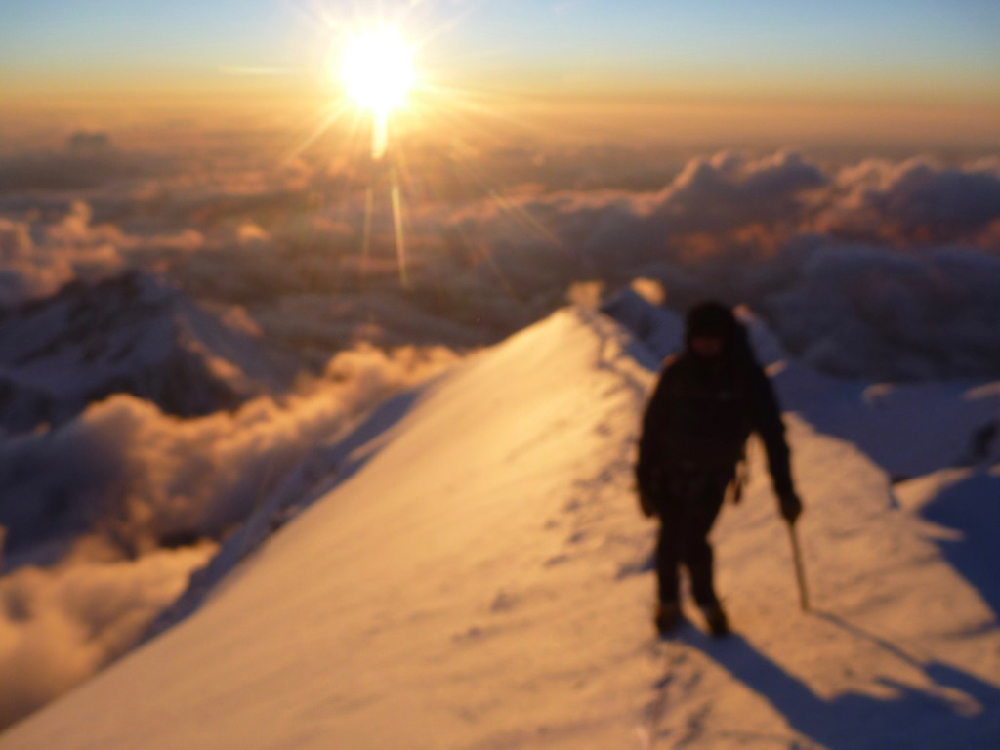