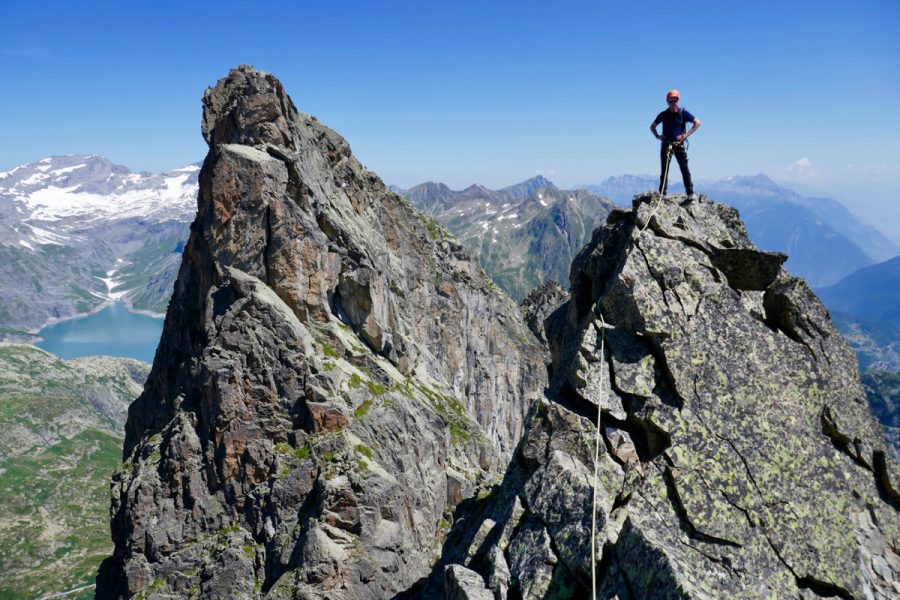 The sky-high mid-summer alpine temperatures are back, and even higher than the last heatwave in June.  Even the high mountains are seeing unusually high temperatures like 12C at the Aiguille du Midi today and 38C in the lower Arve Valley.   We have mainly been enjoying some middle mountain alpine rock this week and have even found some cool shady spots albeit plenty of hot rock too!

Brevent is particularly popular this summer whilst the Flegere lift is being replaced and we had a sociable day climbing La Somone and Hotel California.  Great trainer alpinism!  Guy and Tess also climbed Mic et Maousse and Crackouss and there were plenty of teams on the harder routes on the South and East faces of the Brevent itself.   There is only the odd patch of snow left now even high up around the Brevent although a few patches remain on the descent piste and around the bases of the crags but these are generally easily managed.

Whilst Guy & Tess climbed the Table de Roc Spur and over the Aiguille du Tour, we went to the idyllic Col des Aravis and made the sustained ascent of the steep north facing Combe above the col to climb the brilliant Arete de Marion.  Three very enjoyable big pitches of limestone 4a-5a followed by a lovely alpine feeling limestone crest and a couple of pitches up to 4c to finish.  Before the steep and pretty loose descent!

The middle mountain rock continued today with the Traverse of Les Perrons above Vallorcine at the Eastern end of the Mont Blanc Massif.  This is a very fine alpine style AD route starting from a Swiss café with an awesome view across to the north faces of the Chamonix Valley.  The route starts with a steep path leading through some scrambly outcrops before gaining the crest at around 2600m.   The rock on the actual route is generally good and there is some great scrambling along the crest with Impressive exposure in places!

The actual climbing sections only go up to 4b or so although there is plenty of route finding to do along the way and very little fixed gear apart from the well equipped stations for the 5 abseils on the East to West traverse.  It’s not a short day for most teams and we were around guide book time having taken just under 8 hours round trip from the cafe at Emosson.  Whilst some teams are much quicker, those without good route finding and rope work skills could easily spend a fair bit longer than this!  Paul commented that is felt like a low altitude Matterhorn summit day!

In the high mountains the heatwave has created some dry conditions with teams taking advantage of this in places like the traverse of the Eiger and some big alpine rock routes like the Walker Spur.  Snow or ice routes have been seriously effected with lots of snow melting out and exposing ice or loose rock below.  There are also some serious rock fall problems and the melting permafrost appears to be creating rockfall in places previously thought pretty solid, like some of the high altitude Chamonix granite routes such as the Cosmiques Arete.  There has been a significant rock fall accident on the Matterhorn with a rescue operation taking place at the moment. There have also been some rock fall events reported in the Grand Couloir on Mont Blanc.

There has also been a serac collapse on Mont Blanc du Tacul which crossed the route on the Mont Blanc route from the Aiguille du Midi. More info on the La Chamoniarde Facebook page here.  Due to the serious heatwave around the Alps conditions in the high mountains are currently delicate in places and dangerous in others and, as the Chamoniarde page says above, don’t hesitate to postpone or change your plans.  As one of our guides said last week, if unsure, maybe best to climb something that has spent its life in the sun!

It looks like the weather will shift to stormy and then cooler conditions with some fresh snow above 3200m over the weekend.