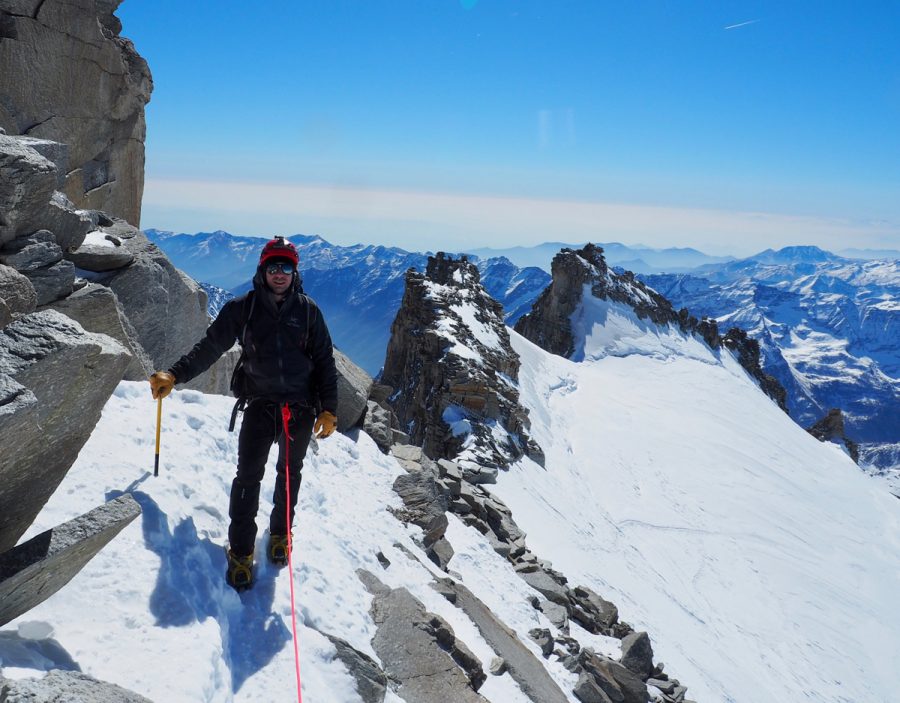 A perfect full moon made the Glaciers of the Gran Paradiso positively glow this morning and it was a pleasure to travel across the glacier above the Rifugio Chabod.  Well, it would have been had we not kept cratering in to collapsing holes in the snow!  Fortunately we had come prepared for this and, whilst not always entirely convinced but the benefits of snow shoe travel in the high mountains, they earned their keep today!

We kept snow shoes on all the way to the main crevasse system running across much of the main glacier valley at around 3650m.  Here the snow became hard wind packed and was easy to crampon up.  The crevasses are big but were easily passed in the track to the right.  The easy valley above to the junction with the Vittorio Emanuelle Route was all hard packed snow and the main final steep slope had lots of ice on but also a good sneaky track through it all on snow.  So whilst it would not be a good ski, it was fine to crampon.

The wind had dropped by now and the sun felt warm.  Thanks to our early start – there was nobody else around – a rare treat on the Paradiso!  We savoured the enjoyable easy scrambling to the summit and admired the posh new pig tails on the final section and wonderful panoramic views before returning to the valley back via the Chabod Hut. The path is snowy to the ranger base at 2200m and the section below that has plenty of water ice slicks on whilst the lower section is mainly dry.

Whilst there were some tracks on the Chabod side of the mountain – with some nice tracks and powder fields at mid-altitudes between hut and summit, most teams had descended the Vittorio Emanuelle side of the mountain and reported that the big steep slope on that descent at around 3650m is well icy and worth avoiding.

It was great to be up on the mountain in winter but snow volume is poor compared to both seasonal average and compared to Chamonix / North side of Monte Bianco.   Great to see Titti and her team as always at Rifugio Chabod and I hope they get some more snow to charge the glaciers up over the spring.