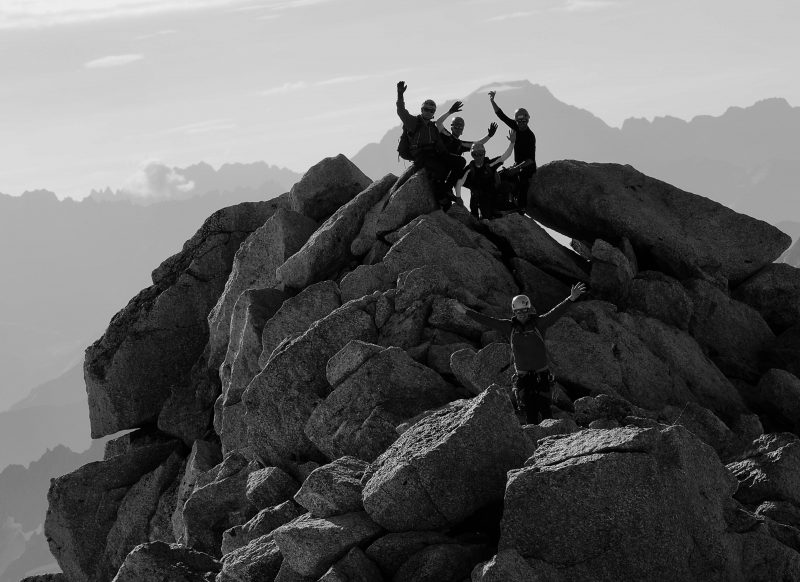 Snow conditions on the Tour & Trient Glaciers at the Eastern end of the Mont Blanc Massif now feel more ‘late’ than ‘mid’ summer, hardly surprising as we approach the end of August!  Whilst at very high altitude, like last week on the Monte Rosa, snow conditions still remain good, in the middle high mountains they have faded fast in the recent weeks of heatwave.   Early autumn may not be far around the corner however!

The walk to the Albert Premier Hut is now done without touching any snow and the glacier around the hut is mainly dry ice with plenty of ugly looking grit and rocks on the start of the glacier ascent to Signal Reilly (c.2900m).  This still passed easily and rapidly however and the continuing track was fine despite crossing numerous crevasses and sections of dry ice.

The Col Sup du Tour looked particularly unappealing with steep dry ice, grit and plenty of loose rock in evidence.  There were still quite a few teams crossing it though and following an icy looking track, in lean glacier conditions, round to the Aiguille du Tour.   Likewise the Petite Fourche final snow slope was pretty icy and whilst some smaller teams did it, our larger teams re-routed towards the Tete Blanche summit.

Conditions are pretty dry in general, good for high altitude rock!  There looked to be a large and steep crevasse below the Col Blanc and unsurprisingly, no teams on the Chardonnet!

Conditions were reported as being very good for the Matterhorn summit day via the Hornli Ridge on Sunday. However a rock fall below the Hornli Hut shut the path and climbers at the hut were shuttled down to Schwarzee via Helicopter.  The path was supposed to be re-opening today.

Conditions on the Lagginhorn South Ridge were good last week with Mike & Helen climbing the South Ridge from Hohsaas via an easy approach, dry rock on the South Ridge, climbed without crampons, and a straightforward but long descent down to Weissmeis Hut via the direct finish to the ridge.

Conditions were reported as still good on the Gran Paradiso albeit with more new crevasses opening up on the glacier above Chabod Hut and also good on the Monte Rosa snow summits approached from Gressoney.

Numerous ascents of the Dent Blanche also reported via both the South and West (Ferpecle) Ridges.