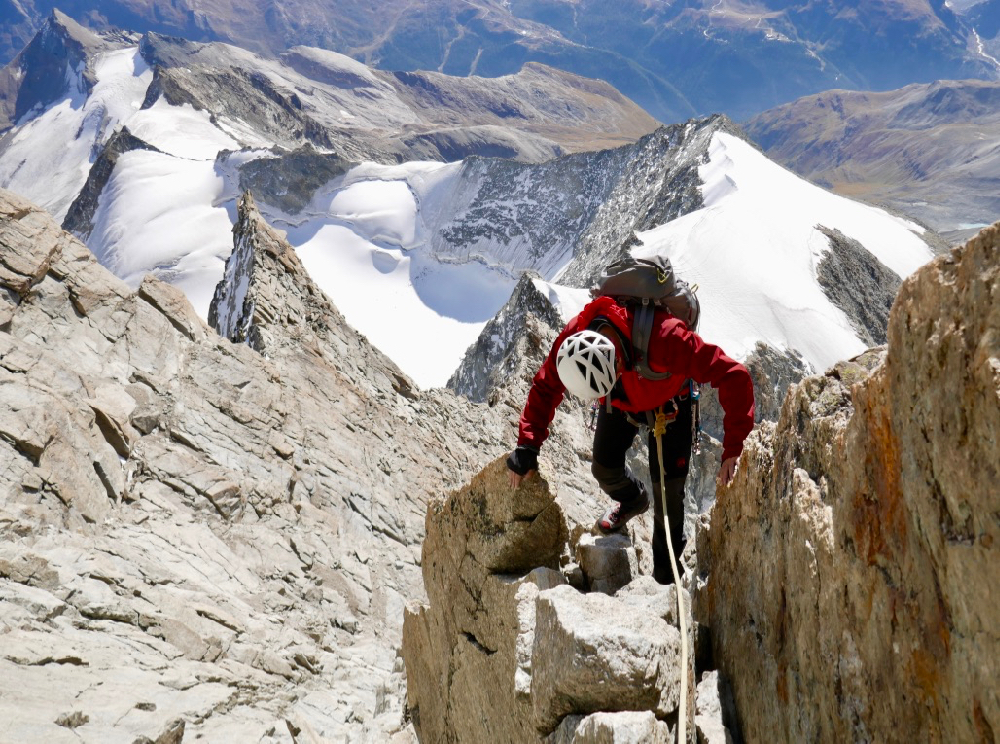 Last weeks fresh snow and autumn feel in the mountains around Zermatt had been blown and baked away by this weeks warm winds, sunshine and late summer weather.  The mountains looked dry again and even icy in places with lots of dry rock and some good late summer conditions on the right routes.   Whilst Castor and the Breithorn looked much more icy than last week, there were teams doing both and we enjoyed the half traverse of the Breithorn from Kleinne Matterhorn.

The approach to the Col at 4022 was lean and required several pitches with ice screws before the dry and warm rock was reached and traversed via numerous short pitches, to the central summit and it’s narrow snow ridge.  We descended easily from here although the continuing ridge to the Breithorn west summit and normal ascent route looked a bit more icy.  Likewise Castor looked more icy than last week but the team who made a rapid round trip from Kl Matterhorn said it was fine.   Next morning we saw several teams head torches bobbling up the Matterhorn Hornli Ridge and there was a big track heading up to the West Ridge of Dufourspitze also.

We spent a good night at the Rothorn hut winter room before setting off on a cool pre-dawn start on the Zinalrothorn normal route.   Much snow has melted since our last ascent in early August and there is a lot of loose rock to get going up to the small glacier and loose rocky chimney which provides access to more loose rocky scrambling!   The upper snow patches have also seriously ablated although this meant they were relatively easily passed on rock before the main snow ice slopes could be accessed leading up to the pleasant snow ridge which provided solid enjoyable access to the upper rock bastion.

We took a better line along the loose rock terraces to access the fine rock rib next to the Gabel couloir and made good progress up this via several large bolts to the Gabel itself and more enjoyable solid scrambling to the base of the fine Biner Slab and crux of the route….

This was all dry today and we carried our axes & crampons to the summit without using them after the snow ridge.  There was only one other team on the route and this consisted of 2 brilliant 4 legged climbers – Chamois!  This team of hairy alpinists came from the Zinal side and up the West Face and we watched their relaxed progress up the steep and loose slabs on the west face with awe!  Then one appeared on the ridge itself, just to show us how it’s done by the real locals…

There was not a breath of wind and the views were also breathless.  The local Chamois may have also wryly noted that the 2 climbers were also somewhat breathless!  We sat for a while on the summit enjoying the calm early autumn light and magnificent panorama before reversing the route only a little quicker than we had ascended it.  We saw a decent looking track accessing the north ridge on the mountain via Mountets Hut.

We also saw a decent looking track on the descent to Rothorn Hut coming down from the Wellenkuppe and teams had noted in the hut book they had done Obergabelhorn recently.   Neil & Julian climbed Gran Paradiso earlier this week and they are trying to climb Mont Blanc tomorrow.   Update to follow shortly!  Simon and Dylan climbed the South Ridge of the Weissmies this week and descended the same way although many teams from Almageller continued down the north side to make the traverse.

Update 21 Sept: See Julian & Neil on the summit of Mont Blanc below.  “Still good conditions above the Gouter Hut“. 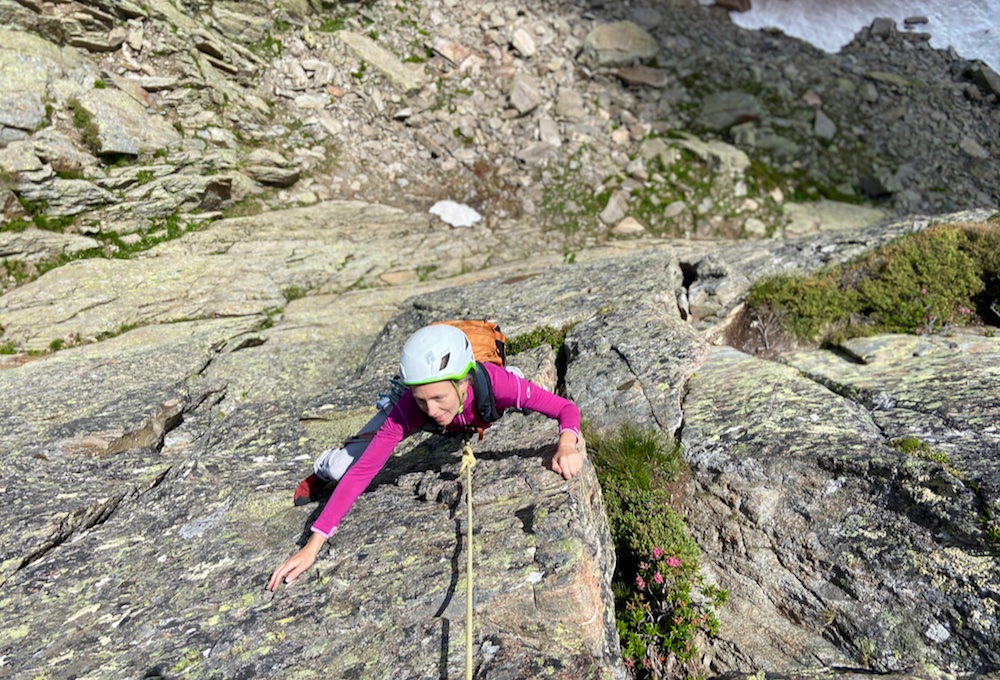 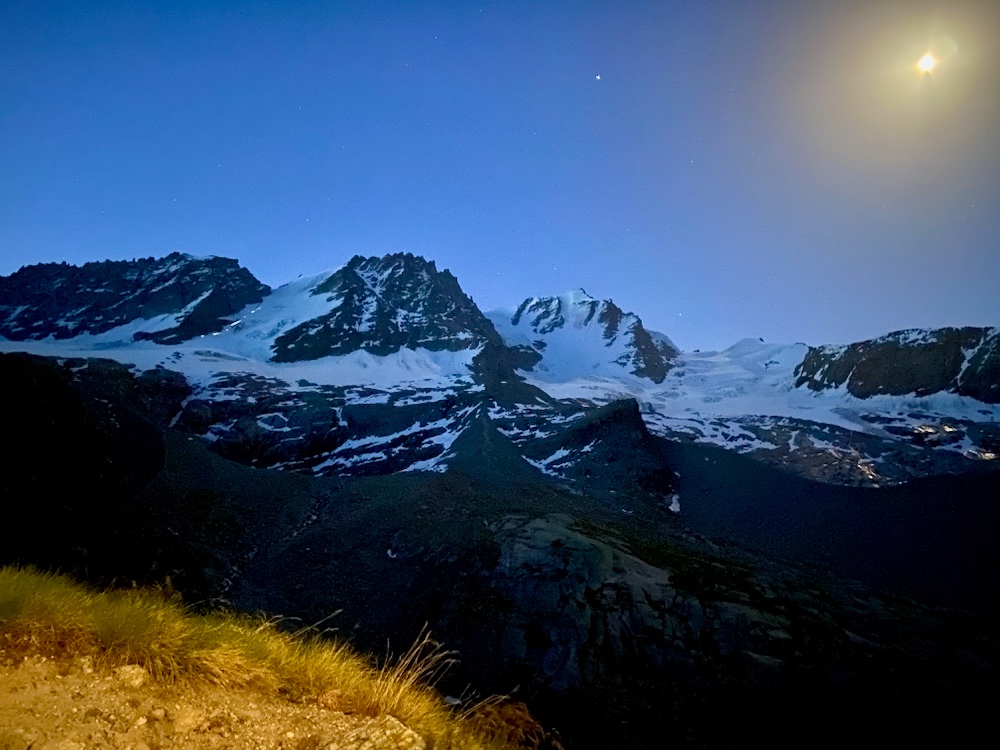 In reply tophil brown
Jul 7, 2020 @ 15:21
@nworbrp La Somone, this is the easy pitch below the crux 5b pitch. Several really good 4c pitches on this bolted route and it's also good acclimatisation as not so far down from Brevent summit at 2525m
View on Twitter
0
1