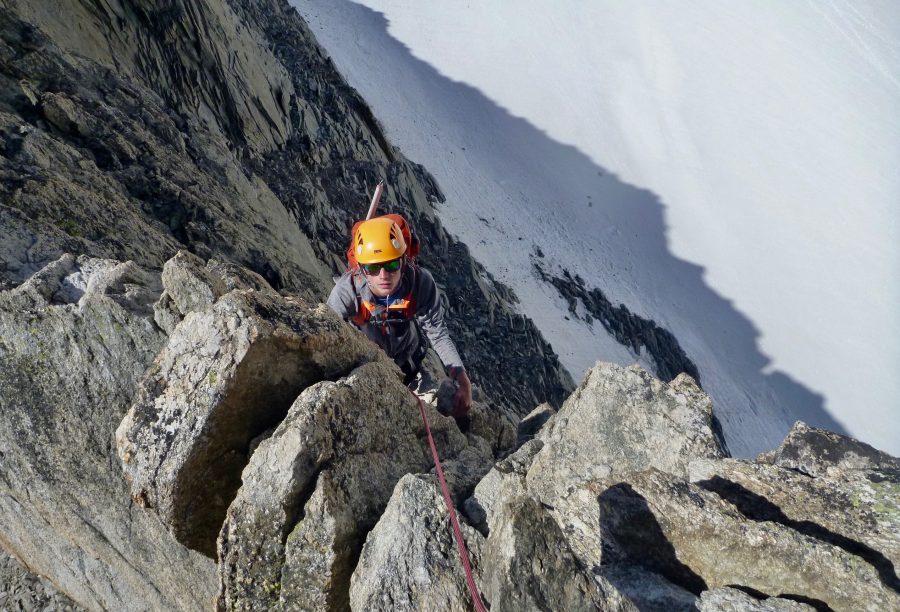 This sustained spell of sunny weather continues in the Mont Blanc range with lots of good high alpine routes getting done.  There was a mini climbers village camped beneath the Grand Capucin today with numerous teams climbing on this famous crag as well as on the nearby Trident and an enjoyable ascent of the Lepiney Route.  Warm conditions and dry sunny rock gave enjoyable conditions for high mountain rock climbing including the Dent du Geant which had numerous teams on it.  The snow couloir linking the glacier to the start of the mixed ground is still just about hanging on, but not for long at this rate!

The Aiguilles Marbrees and Entreves traverses were also dry with crampons off from glacier to glacier and not even any snow on the north facing grooves on the descent of the Entreves summit.  Approaches to both routes are easy with good tracks on a generally still well filled in glacier, although the crevasses are coming through now and the snow turning a bit brown in mid-summer style.  Teams were also climbing the West Face of the Aiguille de Toule in good stiff snow, although the East face voie normale is in mid summer rubble mode.  Likewise the winter route on the Tour Ronde was a steady stream of rubble and falling rocks today.  There was a good looking track heading up on to the SE ridge from near the Col Freshfield however.

Our school group alpine intro – intermediate programme is going well with some very fit, motivated and technically strong students enjoying plenty of good alpine climbing, also including the North Ridge of the Petit Flambeau today.   Tim was heading up the Kuffner Arete tomorrow from the Torino Hut due to apparent instability regarding the Col de la Fourche bivi Hut.  There was a big track heading over towards the Midi from the Punta Hellbronner side with numerous teams doing the traverse of the Vallee Blanche.  On the Midi side there was lots of activity, especially on the Cosmiques Ridge which was ‘complet’ with alpinists!

Good conditions are being reported on both the Hornli Ridge on the Matterhorn and traverse of the Eiger.

It looks like more good weather over the next few days with some hot temperatures building to a stormy day on Monday according to current weather forecasts.