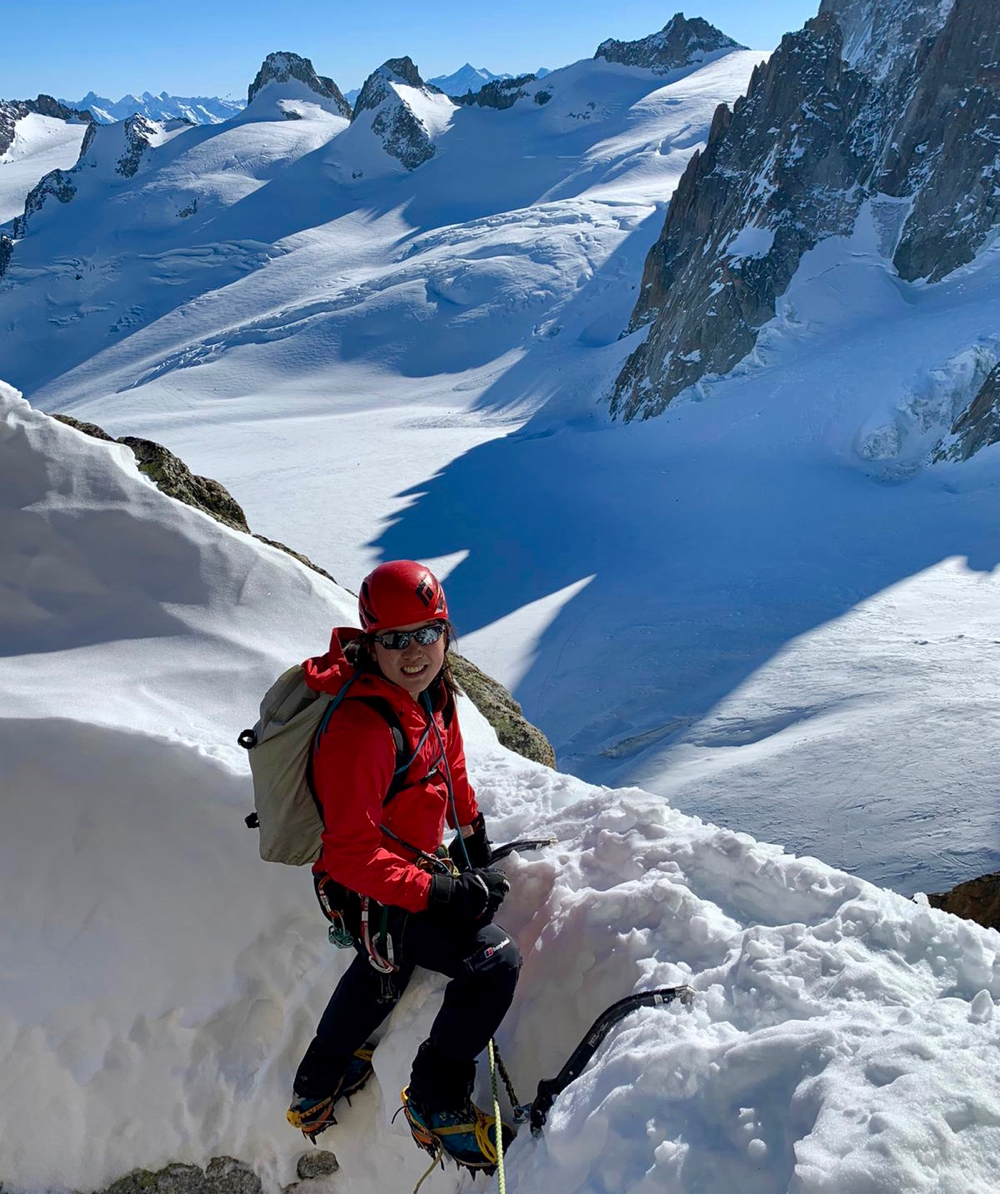 The constant sunny weather has seen lots of high mountain activity around the Mont Blanc Massif and the Avalanche hazard has gone down to low, 1/5, on both French & Italian sides of the range.   For the first time in quite a long time, there is some good ice back in the winter mountains and teams enjoying some great ski – climb days from the Aiguille du Midi.  Kev, Martha & Vincent enjoyed the Pellisier Gully today with an approach across the Col du Midi without skis or snow shoes!  Conditions were good and the team enjoyed some fun ice & mixed climbing all the way to the top of the route.

Other teams were climbing both Modica Noury and Gabarou Albinoni and there are tracks in to various other goulottes and bits of ice around the upper Vallee Blanche area.   Our same team had warmed up before the weekend with a trip to Cogne where conditions are ok and there have been some cold days again recently.  Martha and Vincent have a strong rock climbing background and were able to enjoy the ice climbing on Partri Left Hand all the way up the route.  A great first big ice route done!

There has also been lots of climbing activity around the North Face of Les Pelerins above the Plan de l’Aiguille, Chamonix, with quite a lot of teams climbing Beyond Good & Evil and The Carrington Rouse route.

The stable snow pack has seen lots of ski touring activity away from the resorts and in the high mountains.   Our Chamonix Intro Ski Touring team had a good weekend with an intro to touring around Le Tour’s Tete de Balme area on Saturday and a ski tour from the Skyway Monte Bianco and down the Vallee Blanche to Chamonix yesterday.

After the light mini snowfall last week there were some fun strips of windblown velvet snow at Le Tour with shallow fresh tracks to be had in places.   We toured around the Col & Tete de Balme areas and did lots of ski touring training along the way.

We also did a boot up the Tete de Balme and skied down towards Trient before skinning back to the Col de Balme.   Teams descending back to the Vallorcine chair lift described some rattly conditions on the return to the resort!

Yesterday we ascended the Skyway Monte Bianco lift, skied in to the Vallee Blanche from the Italian side and toured up for the super scenic picnic at the Col d’Entreves.  It was good to see Mario, the previous guardian at Rifugio Benevelo and get some info on Italian ski touring conditions.   There was a team just starting up the North Face of the Aiguille de Toule and also a team traversing along the Freshfield Arete having gained this good ridge on the Tour Ronde from the slopes just lookers right of the Col Freshfield.  There were also tracks up the more direct gully & couloir lines further right on that face.

There is plenty of sastrugi around up the near the Col d’Entreves but the there was a nice shallow layer of fresh velvet after last weeks fresh snow and, in sheltered places, this gave some fun fresh tracks on either a firm base or, in places a light crust.  The ski down the Vallee Blanche was fun and we joined the classic route for the bumps on the North side of the Geant ice fall and down past the Requin Hut which had a decent looking access / descent track.  There are several big crevasses at entering the Salle a Manger but an ok track through.

The lower glacier has shallow snow cover with quite a bit of exposed ice in places but had night soft velvet snow leading down to the more tracked snow across the Mer de Glace.  There were teams touring up the Periades Glacier both skiing back down the same way and reporting nice shallow fresh tracks and also decent reports of the snow over the Breche Puiseux and down the Mont Mallet Glacier despite some big open crevasses at the top.  Good steps reported in the couloir leading up to the Breche.

We took the train down from Montenvers as the lower glacier looked lean and rocky with reports of an exposed icy section to reach the also icy boot up the buvette.  Whilst the sunny weather is great for having a stable snow pack and touring in the higher hills, most teams are now looking to the forecast to seen when the next fresh snow is due to arrive.   Could be later this week.  Let’s see!

Many of our 2020 Chamonix based ski courses are now full but we do have places left on the following group courses and also availability for Chamonix private guiding so please get in touch if we can help with ski or mountaineering guiding this winter or spring season.