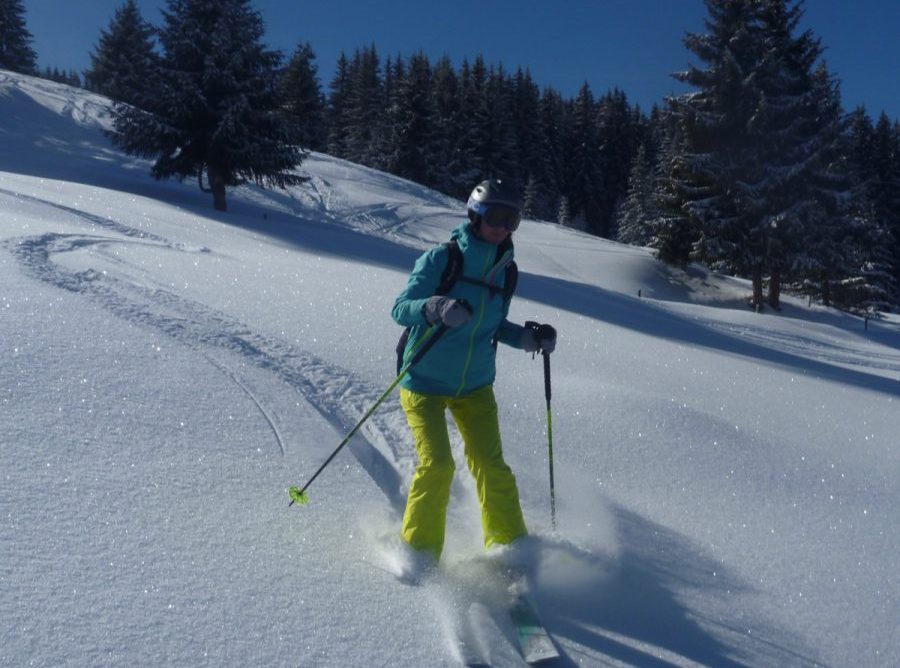 After another good top up of snow on Sunday night and Monday the already above average snow pack has been further augmented and is currently displaying impressive conditions at all altitudes.  With the cold start this morning and brilliant blue skies it was a low & middle altitude powder skiing paradis!   The wind looked like it was blowing hard higher up – on the summit of Mont Joly at 2500m for example, but in the meadows of Megeve it was ‘dingle’…pristine!

Lots of teams were enjoying the ‘tip top’ pistes of Megeve today although it did not seem that busy for ‘Vacances de Ski’ time.  The off piste conditions were superb with meadows charged up with fluffy pow, even on sunny aspects this morning although the warm temperatures on the way may mean a shift to the shady side will be required in the days to come.

This was a welcome top up as the snow below 2000m had been warmed and even skiing off the Christomet at 1850m above Combloux on Sunday there was a light melt freeze / sun crust, even on shady aspects.  We skied the Eperon feature leading down towards Le Plan / La Giettaz but skinned back out as the crust got thicker at the 2nd of the 3 chalets!  As we made our way back towards the Col de Jaillet in the afternoon, very strong winds and heavy snow were arriving and 40cms of snow then fell at 1800m further improving the already good conditions.

The snow was much less wind effected above Combloux than the previous day on the Off Piste Performance intro ski touring course we were working on.   At Le Tour most slopes on the Chamonix side were well wind scoured and not very pleasant except where light drifts had formed.   All around the Tete and Col de Balme the slopes were pretty trashed by the strong winds too – even lower down the slopes on the Vallorcine and Trient flanks.   Lower down in the woods the snow quality was good again but there was not much slope left before the melt freeze crust was reached then!  Again this will all have benefited from a good top up with the 40cms of fresh on Sunday / Monday.