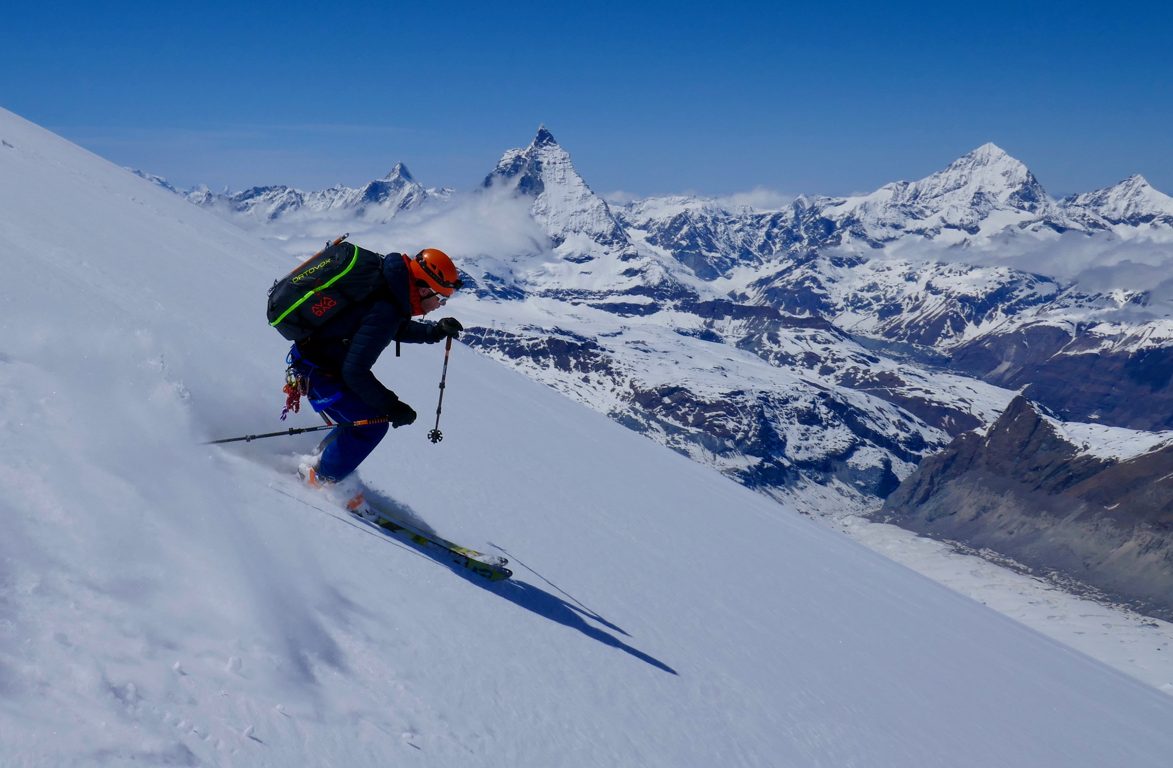 Whilst the weather in Zermatt was indeed better than Chamonix, it still wasn’t that great!  And whilst there was a lot less fresh snow at the Kleine Matterhorn than the Aiguille du Midi, there was still plenty, and plenty of wind too!  Our plan to ski the Schwarztor glacier en route to the Monte Rosa Hut turned in to a cappuccino piste run to the Testa Grigia Rifugio Guido Cervinia.  Some more piste skiing and delaying tactics finally gave a clearing and we enjoyed a good run down the Unterer Theodul Glacier, staying close under the rock ridge with the Gandegg Hut above.

The lower Gorner Glacier was in relatively good condition and we enjoyed a steady skin up to the Monte Rosa Hut with atmospheric light & very few other teams around although Barry and his client had indeed done the Schwarztor and reported nice snow with around 30cms of fresh at the top.

There was much less fresh snow lower down and further east and only a few cms around the Hut.   A few teams had also come in from Gornergrat / Rotenboden and the steep south facing slopes above the path had cleared of fresh snow by the end of the day.

After a 4am breakfast we made steady progress up the Monte Rosa Glacier with an increasing amount of fresh snow and more cloud than had been forecast!

At 4000m the cloud was still thick and, with gathering wind, the chance of an ascent of the exposed West Ridge of the Dufour seemed pretty slim.  But the Swiss weather forecasting service had predicted a major clearing of the clouds by 10am, and, from the Italian side, the sun appeared and delivered a seriously wow factor view of the Valais Giants with the Liskamm looking particularly massive!

Our proposed route of the West Ridge on the Dufour was getting blasted by the wind but looked good and snowy and the approach to the col was a handy mixture of easy angled velvet powder followed by steep wind scoured but grippy snow which meant the col could be reached on skis with ski crampons.  The route to the Silbersattel looked very crevassed and all teams except one headed towards the West Ridge.

After a windy transition we started warming up and enjoyed the sustained steep snow slopes and views across to teams touring around the Margherita Hut and snowy peaks of the Monte Rosa inner sanctuary.   The mixed scrambling along the West Ridge was in great condition involving very enjoyable easy alpine mountaineering in a superb position on this second highest peak in the Alps…

Ski conditions for the descent were also good, with plenty of powder on the upper slopes and only the odd pitch of light wind crust!  Snow volume on the glacier seemed pretty good and there were teams also touring up the Grenz Glacier and over to the Rifugio Gnifetti.   Below 3000m there was some excellent spring snow cruising past the hut.  Teams were descending via the summer path leading back up to the Gornergrat railway and also via the lower Gornerglacier down towards the Gorge which is now finished for the season with high water volume and low (soggy) snow volume! 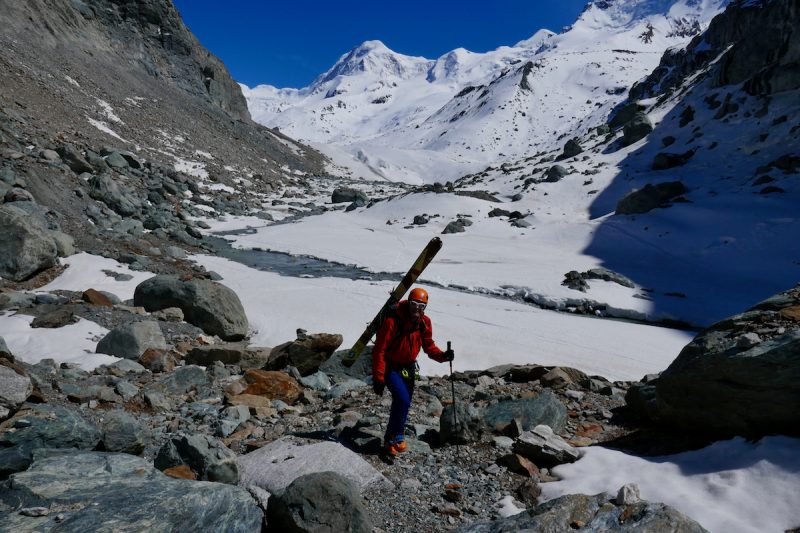 The lower Gorner Glacier and rocky scramble to bypass the Gorge sectionThe rocky scramble over the Gorner Gorge shoulder gives an unusual feature on a ski touring day and is ideal for connoisseurs of scrambling over smooth slabs in ski boots!  After the gorge, a pleasant summer path leads down to the piste which provided a continuous ski to Furi.  If you do happen to miss the last lift down from Furi, we can confirm the descent footpath is continuously covered in deep wood chippings, handy for softening the blow on sore feet in ski boots….Only in Zermatt!

We will be visiting the magnificent Monte Rosa Massif & ski mountaineering there again next spring on our Spring Ski Summits course.